Sorry it  has taken so long to make another post. I had some issues during travel, arrival and with luggage. Still waiting on my luggage now. Anyway I am here in Germersheim writing this at my apartment, which ,thankfully, has internet. Unfortunately it is only available for 6 months of rent at a time (not month to month, or sub-leasing available). Since I am only here for 3 months, I tried to negotiate (Verhandeln). Then they threatened to call the cops if I didn't sign lol (that escalated quickly), so, I was out of options. Sucks, live and learn. I couldn't find another place to live, really and was out of time. Anyway, enough whining. Germersheim is a beautiful little Fortress city (Festungsstadt). It's been around since the Holy Roman Empire, as such, it is a popular tourist destination. Cool!  It was officially named a city by the German King Rudolf von Habsburg in the 1200's. Anyway it has some great old architecture and almost everything is within walking distance. I still have lots of stuff to take care of here (banking, rent, etc.) I opened a bank account at the German bank, Sparkasse, to avoid fees from using my American bank. Not sure how that will go, it will be an experience, anyway. The university is still on holiday so none of my contacts are there. I have made contact with Johanna, who was assigned to help me through a Buddysystem at the Uni. Luckily she lives in Germersheim. She has helped me immensely. I've already met some other Americans, too. Hopefully everything will work itself out in the coming week. I've already got some possible avenues to pursue for a bike to use, hopefully that will work out. It is a university city, so many students loan out stuff or sell stuff they won't need anymore for the semester. Coolbeans. I can't really do much as far as signing up at the Uni in person because no one is there, wish someone would have told me that ahead of time. As it stands, since tomorrow is Easter, I will have to wait until next Tuesday to deal with the University bureaucracy. Also, all the shops are closed all weekend, which reminds me, I should go shopping. My knowledge of Deutsch has helped me, but I still have much to learn. It is hard for me to formulate complex sentences and speak fluidly still. I can understand a good bit when people are speaking though, certainly enough to get by for the time being.  Here are some photos I took. I am a crappy photographer, so. 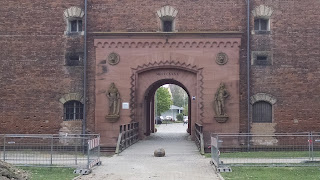 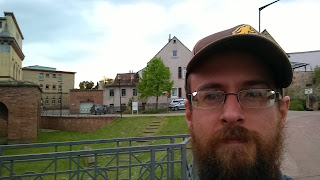 Selfie with city in background 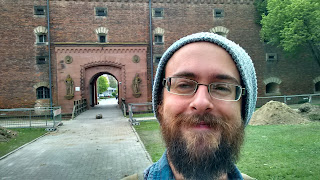 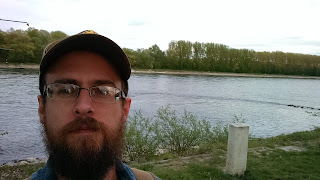 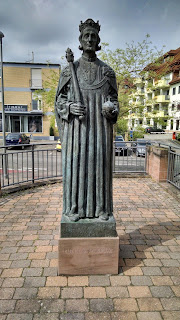 King Rudolf
Ok, I'm pretty ugly so I won't take anymore Selfies. Didn't realize how much of the photo they took up. Love all you guys! Til Next time Bis Spaeter!